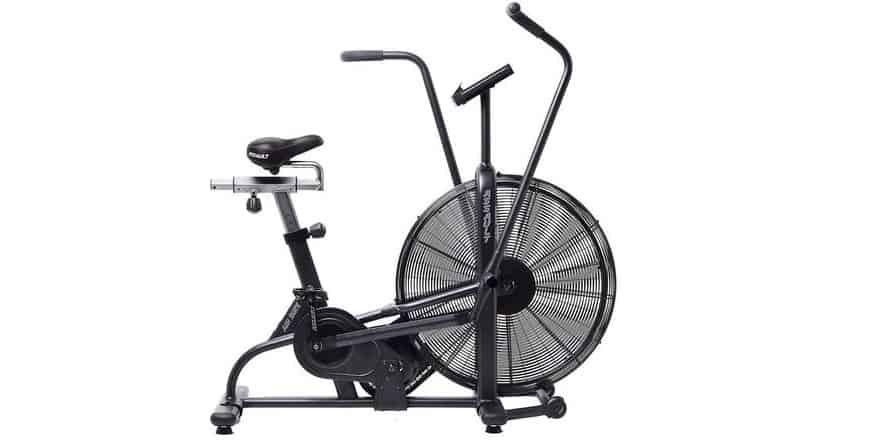 There are many different ways for people to get fit. Some people go swimming and build up their cardio that way. Other people rely on a strength workout for their fitness routine, developing extra muscle as they go.

As the health and fitness world continues to evolve, companies are even finding new ways to put our bodies to the test with the help of the right equipment. Tools like the Assault Bike may surpass all other fitness machines for anyone searching for cardio-based, crossfit style exercise.

An Assault AirBike is one of the most versatile machines in the gym industry. However, it’s also highly accessible. If you have a joint injury or a hip strain, the Assault Bike will maintain the strength in those injured muscles.

Today, we’re going to introduce you to the low-impact world of the AirBike and how it may give you some of the best exercise routines.

What is The Assault AirBike? 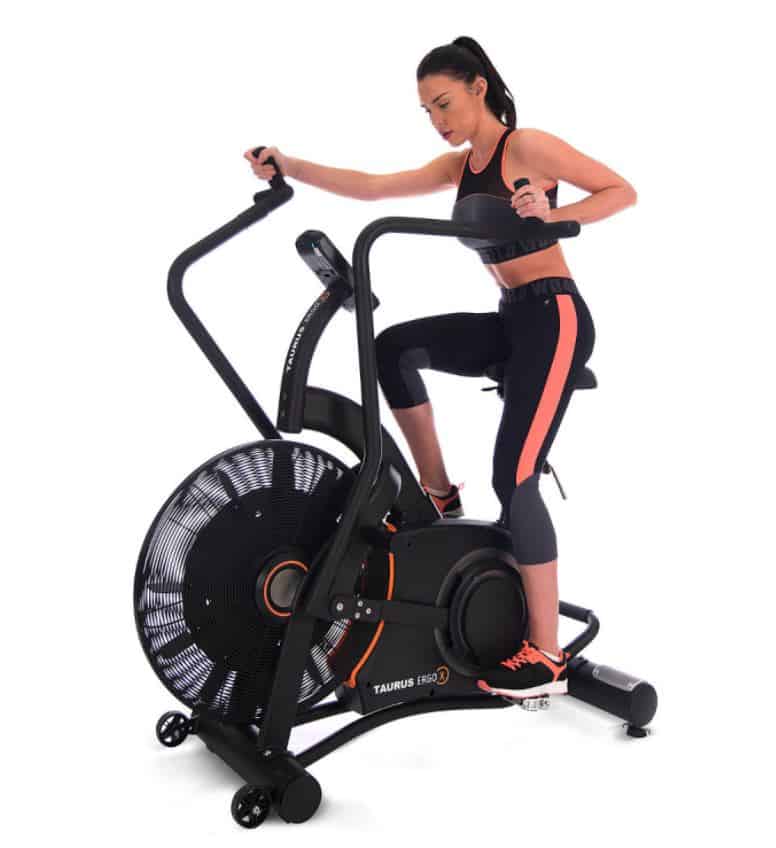 The first thing you should know is that an Assault AirBike isn’t the same as your standard fitness bike or indoor exercise bike. This is a carefully constructed machine that allows for minimal impact and plenty of movement.

An Assault AirBike is a heavy-duty exercise bike created based on feedback from coaches and athletes. Athletes built this machine to help other athletes get in shape. The AirBike retools almost every aspect of the standard fan bike, from the monitor to the pedals and frame. An Assault AirBike uses air resistance and crossfit style interval training to improve aerobic capacity.

Essentially, an AirBike is three machines in one. You can perform your full Assault Bike workout with the machine in bike mode. Alternatively, if you need a chance, most Assault Bikes work as an elliptical. The Assault AirBike reinvents cardio with a range of unique new workouts to explore.

If you’ve had a hard leg day at the gym, you can use your Assault fitness machine for upper-body cardio while resting your legs.

How do you use an Assault Bike?

One thing that makes Assault Bikes so great for people of all fitness levels is that it’s easy to use. Like a standard indoor exercise bike, you don’t need any special training to use a Rogue Assault Bike or AirBike. If you know how to pedal and hold onto a set of handles, you’re ready to go.

A classic air bike works in the same way as a stationary bike for the most part. You sit on your bike and pedal at different intensities to benefit from cardio bike exercise. The major difference between an Assault AirBike and a standard fitness bike is that the AirBike has a fan attached. 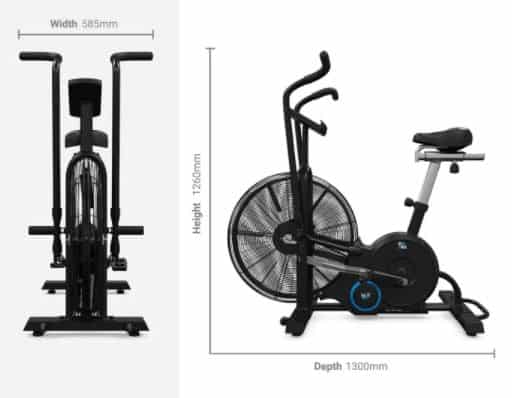 The Assault AirBike helps get your heart rate up by getting you to operate a fan while pedaling. Most air bikes don’t have electronic programs, so you need to choose your resistance level by pedaling at a pace that suits you. The faster and more you pedal, the more you fight against the wind resistance ahead.

You might think of classic air bike exercise a bit like jogging in the wind. However, with this indoor fitness bike, there’s no need to worry about catching a cold.

Unlike other forms of traditional bike exercise, both parts of your body get a great workout here.

Is an Assault Bike a Good Workout?

An Assault workout is an excellent way to get a diverse and effective exercise routine out of just one machine. Even a budget air bike is great for calorie burn and cardio development. If you’re looking for the perfect high-intensity interval training device, this could be it.

Similar to a fan bike, there’s no programming needed. You can choose whether you want to go at a lower or greater speed as you exercise. There’s also the option to use a flywheel attached to a resistance brake to add more sweat to your workout. 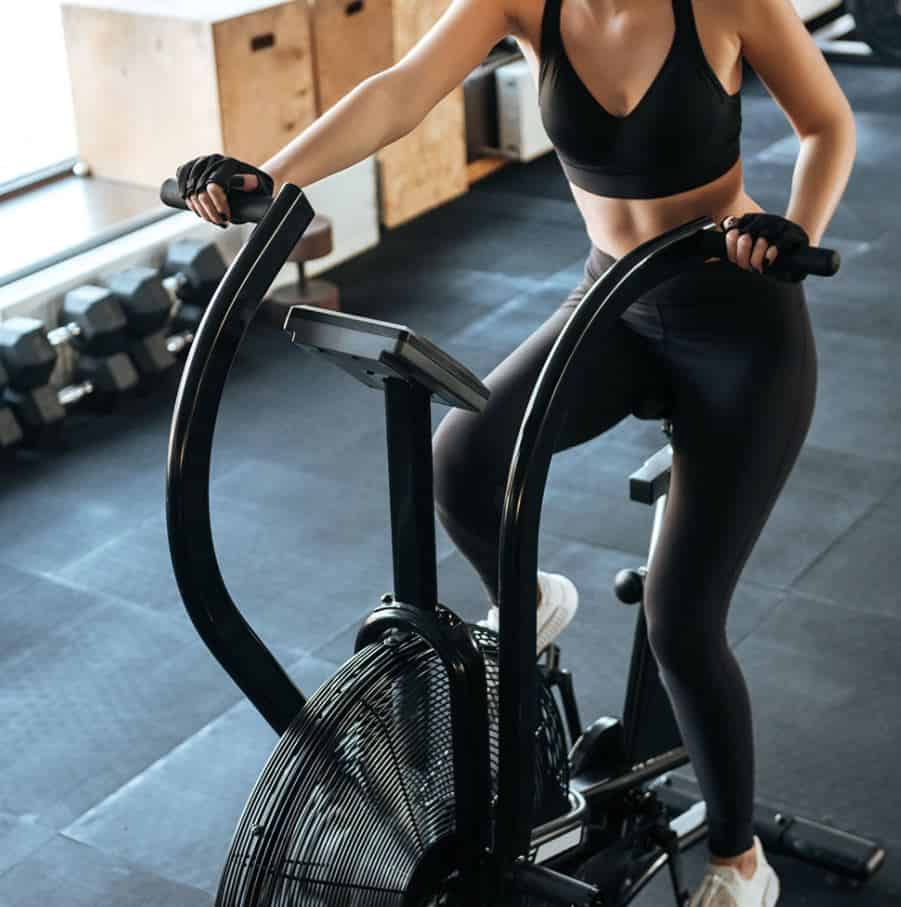 Unlike a traditional stationary bike, which often focuses heavily on the lower body, the Assault AirBike can target your upper body and lower body at the same time. You get a total-body cardio workout without any dangerous high-impact work.

Another major bonus of an Assault AirBike is that you can take your fitness to virtually any level. If you want unlimited workout intensity, an Assault Bike gives you that much better than standard upright bikes. The more you push yourself into a sprint, the greater the wind resistance on your bike becomes. Many rehabs are starting to use the Assault Bike instead of a stationary bike for recovery.

Unlike a road bike, a rower, or a treadmill, an Assault Bike helps you get rid of max calories while reducing your joints’ impact. Since injuries are a common issue for many fitness enthusiasts, it pays to have an exercise bike to use in these situations.

Does the Assault Bike build muscle?

​One thing that makes the Assault AirBike so appealing to athletes and fitness engineers is its diversity. Thanks to the option to engage in interval training, you work harder on an Assault Bike than a regular stationary bike. The calorie burn is amazing because the simple push-pull mechanism of the bike forces the body to work harder.

With an adjustable seat and a range of workout styles, you can find the routine that works for you and push yourself towards a wide selection of different goals. With the right fitness trainer, you can even use your Assault Bike to build muscle. Extra high-intensity sessions will build stamina, endurance, and strength.

At the same time, switching between high-intensity and mid-intensity exercises is great for your endurance too. Some athletes start with ten seconds of full-throttle pedal action, followed by ten seconds of slower pedaling. Other people opt for much longer, more grueling sessions.

Is the Echo Bike harder to ride than the Assault Bike?

If you’re looking for a new kind of workout, then you might have heard of the Echo Bike as an alternative to the classic Assault AirBike. The Echo is a Rogue Assault Bike that’s slightly more difficult to use than the standard Assault AirBike This air bike has a different kind of belt drive, a high-end one that pushes the athlete to work harder.

Another major difference between the Assault and Echo bike is that the frame is a lot bigger on that Echo. The chain drive on the echo bike may be a lot sturdier too. Self-tensioning belts power Echo bikes, so they’re more stable than the Assault AirBike console.

A Rogue Echo Bike can be more expensive than an AirBike. However, you get a slightly more advanced experience, similar to what you see in CrossFit games.

How Often Should I Use an Assault AirBike?

The frequency of your Assault AirBike workout will depend on your unique needs. Some people find that achieving their fitness goals with this kind of fitness bike is difficult at first. There’s a new kind of challenge involved with an Assault Bike than most people are used to.

However, an Assault Bike is an excellent way to increase your heart rate and improve your cardio strength. As you get more comfortable with the AirBike and work out more often, you’ll find that adjusting your intensity becomes much easier.

The best way to make sure that you feel comfortable when progressively increasing your workout intensity is to stick with the same bike. For instance, if you started off using a Rogue Assault Bike like the Echo, continue using it.

Doing your research into the kind of air bike options available will help you ensure you’re picking the right product from day one.

Remember to Track Your Progress

Remember, although air bike products don’t always come with an electronic system attached, you need to track your progress. Cheap gyms might give you a heart-rate monitor or some other tools that you can use to keep an eye on your progress.

Focus on building your power-to-weight ratio. Ideally, you’ll want to get to a point where the amount of power you output is equal to or greater than the benchmark for your weight.

If you want to take your riding out to the roads, check out these amazing beginner bikes!

Diamondback: The Diamondback is an awesome place to start. It’s an all-around model that delivers comfort, stability, and performance for a fair price.

Giant Escape 2: “Escape” to the open roads with this versatile, jack-of-all-trades model!

Cannondale CAAD8: Start off Bikemunk’s review of the Cannondale series with one of their best beginner bikes!